The Lost City of the Crowfolk

Few have heard of the City of the Crowfolk and those few call it Lost.  It was old when the Queens of Day were young, young only when The Absented dwelt in the World. It was the Crowfolk's capital, a jewel pillowed by the foothills of The Spine of the World.  It lies where it has always lain, yet no woman or man or child seeks it out.  Only the Crowfolk walk there and they walk there only in dreams. 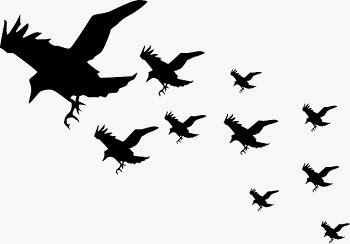 It is large this Lost City and its buildings are tall.  Though none have dwelt there for six hundred years, it has neither crumbled nor faded.  Nor a snowdrop nor a daisy nor a blade of grass grows where it should not.  No moss marks its walls, no lichen sits upon its wide, flagstoned roads.  Not a fox pads over its streets nor does a mouse scuttle within its walls.  And no birds sing.

There are no merchants on the Almond Way, no jewel-cutters on Bright Street.  The dim halls of the Morthouse are shadowed only by their own stones, and the waters of the Three Fountains play unheard.  The Tower of Ravens, so high, so high, looks down and sees nothing and naught.  The City is Lost indeed.
at 11:20 No comments: