The Theft of The Heart of The World, Part III: A Matter of Trust

[Part I of this story can be found here and Part II here. In summary, Otherwhile's most able thief, Arbor Vulpa, plans to carry out the Greatest Theft The World Has Ever Known. To this end, he has climbed the walls of the Palace of Days and made his way into The Tower of the Heart, where he was much surprised to find himself not between four stone walls but rather in the middle of a large forest. After getting thoroughly lost among the trees (Arbor is a city boy at heart), and discovering a ramshackle hut with what appeared to be the skeletal arms of a giant monkey poking out from underneath it, he met a dark-dressed man more long than tall, who assured Arbor he wasn't planning to kill him.]

Arbor pressed on into the tunnel, the flames of his torch licking the walls that pressed in upon him and breathing dark smoke on the ceiling under which he was forced to crouch.  The dark-clothed stranger had been as good as his word: offering advice and explanation aplenty and, as far as Arbor could tell, not once trying to kill him.  Such honesty was, in Arbor's experience, increasingly rare in these troubled times.  It felt uncomfortable to trust it.

Equally uncomfortable was how little Arbor had been able to understand of what the stranger told him, but then Arbor wasn't entirely sure that the existence of an apparently unending forest within tower walls he could walk around while holding his breath was a thing that could be easily comprehended by anyone.  And as for the cottage that stood in the middle of that forest, or the gigantic, skeletal arms that protruded from beneath it ... such things were as far beyond his understanding as was the idea of seeing a heavy purse without trying to lighten its load a little. 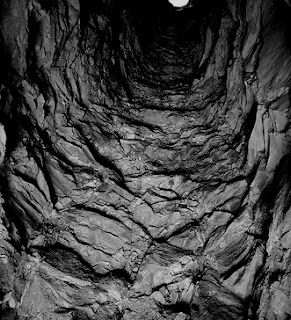 No, Arbor had satisfied himself with nodding and smiling at the stranger's words, paying attention instead to the stranger's face and movements, looking out for the possibility of either a threat or a lie.  Neither had come.  Instead there had only been the various incomprehensible explanations and enough advice to make Arbor's nodding and smiling worthwhile.  In all he had learned three things and another thing from the stranger and from those things he could deduce several more.

The first thing Arbor had learned from the stranger was the location of this tunnel.  From this Arbor could deduce, or at least reconfirm, the stranger's familiarity with the forest, which led Arbor to believe that the stranger might have been speaking the truth when he said that the trees and birds and small, swift-moving creatures that roamed across the undergrowth belonged both to another place and to another time, however strange the idea sounded.  After all, what could be more implausible than the idea of a gutter-beggar of Farla rising to a place where he could commit a crime that would send shivers through History itself?  Yet that was exactly what Arbor proposed to do.

The thought gave him added urgency.  Much, not least the prospect of his neck continuing to play its favoured role linking what he liked to think of as his noble head to his finely-hewn body, depended on his plans being executed swiftly.  How long had he spent wandering among the trees?  The stranger claimed that time meant nothing in the forest and that, as soon as he left it, Arbor would arrive back in the Tower of the Heart, just a moment or two after the point he had first slipped within its walls.  But how far could the stranger be trusted?

Arbor would have a better idea when, if, he reached the tunnel's end.  If the tunnel led to the inner staircase of the Tower, he would know his informant was a speaker of truth and one who wished him well.  If, on the other hand, the tunnel ended in a dead end, or a deep pit, or the lair of some beast, or some other direct route to pain and probable death, Arbor would be less inclined to think kindly of the stranger.  Indeed, Arbor felt he might well use his dying breath to curse all dark-clothed strangers more long than tall and all those who put their trust in them.

He was dwelling on this thought, rolling it round in his mind as a man rolls a half-full cup of warm drink between cold hands, when the near-silent pad of his feet was replaced by a sudden splashing.

Arbor looked down at the puddle beneath his feet and saw how it stretched out to meet the sides of the tunnel.  "How deep?" he wondered.  He thrust out his torch, watching as, below him in the water, his twin did the same.  Both of them looked forward and saw how, at the very end of the torch's light, the roof of the tunnel bent down to join with its reflection  It seemed like a very good time to begin cursing.

Ten minutes later, Arbor was tired of hearing his voice echo along the tunnel and conscious that some of the epithets he was flinging at himself, at the long, dark stranger and at the world in general were beginning to repeat.  With a sigh, he knelt at the water's edge.  There were, it seemed, only two choices.  He could go back to the forest and resume his wanderings, lost in the wrong time and place, with only the hope of encountering the stranger and doing him some very severe harm to sustain him against the consciousness of failure.  Or Arbor could trust that beyond the water lay the tunnel's exit and, beyond that, the prize he sought.  In truth, there was no choice at all.  He began to strip down.  Shortly afterwards his clothes and gear were bundled tight in oilcloth and he was stepping out into the water.

It was cold like a knife in winter and he gasped long and loud before seeking warmth in a few choice oaths.  He ducked his head under the water, rose, swore again, ducked, rose, swore once more.  And then he paddled out to the point where the tunnel itself plunged downward, took a deep breath and followed suit, striking out with arms and legs as he dove down into the darkness, gambling his body and breath against the rock above him and the water around him.