A Little More about The Murrain

[I thought readers of The Coming of The Murrain (not to mention anyone else who likes to pop into Otherwhile now and again) might be interested to learn a little more about that dread disease.  Luckily, I happened upon the following entry from an Otherwan Medical Encyclopedia, which I understand will be written some day.]

The Murrain  is the name commonly given to the devastating plague which swept across the globe during the latter years of the reign of Sombred IV and came to visit and revisit Otherwhile itself many times over the next forty years. 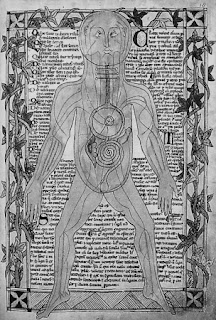 The disease was extraordinarily virulent and inevitably deadly, striking down somewhere between one third and one half of Otherwhile's population and wreaking social and economic havoc across the known world.

The precise incubation period of the disease is unclear.  Close examination of accounts originating from Otherwhile to distant Afar to the long-off Plains of Osta would suggest it could be several weeks from someone having contact with an infected person to themselves showing symptoms.  These symptoms inevitably began with a mild fever and lightheadedness, moving on to coughing, perhaps with blood in the saliva; from this point, death ensued within fewer than twenty-four hours.

Death, however, was not the worst part of the Murrain.  In every case, save where steps had been taken to restrain the corpse, within at most two days from the time of death the deceased's body would rise up from its rest and resume the form of its habitual activities; that is the body would go through the motions that it followed as matters of routine during its lifetime.  Thus a blacksmith would take up his hammer and beat the anvil as if making a horse's shoe; a tailor would tap away at the leather upon his last, a shopkeeper stand at his stall.  And yet, in all this, it would be clear that any conscious thought was absent: there might be no iron upon the blacksmith's anvil and no fire in his grate, the tailor would not think to select the leather for the last, the merchant would bargain for no goods.

This animate yet unliving state would typically last for anything up to a week, with some, doubtful, accounts suggesting a Murrain-stricken corpse might walk for as much as two months after death.  These walking corpses posed no great physical danger to those about them but were a source of deep psychological distress, distress which came on top of what might be termed the ordinary horrors of such a devastating plague.  It is perhaps little wonder that the coming of the Murrain was a time of crisis for many, producing a sudden religious mania in some, quite contrary to the teaching of The Absented.
at 09:04