The Theft of The Heart of The World, Part IV: Dark Memories

[It's been an awfully long time since we last saw Arbor Vulpa, The Greatest Thief in All Otherwhile.  That's an omission I'm going to correct by continuing the story of The Theft of The Heart of The World.  Those of you who are new to the story might want to read Part I, Part II and Part III first.  For those of you who can't be bothered with all that, here's a quick summary: Arbor Vulpa has set out to commit The Greatest Theft in The World; to this end he has made his way into The Tower of The Heart within The Palace of Days, where he discovered (much to his surprise) an enormous forest and received advice from a darkly-dressed man more long than tall, after which, he swam deeper into the tower through a water-filled tunnel, from which he emerged into a darkened room.  As to what happened in that room, well, let's find out, shall we?]

It was bad enough that Arbor had been caught but the fact that he had been caught by a vegetable made it all the worse.  Even in the dark, he was sure that the sticky cords pinning his arms to the floor must be the product of a colony of spider spindles.  He could picture the tangles of fungi around about him, grey-white fingers protruding from the earth.  The idea made him think of corpses and graves; he turned his mind around and set it walking rapidly in the opposite direction while, at the same time, his free hand reached cautiously for his blade. 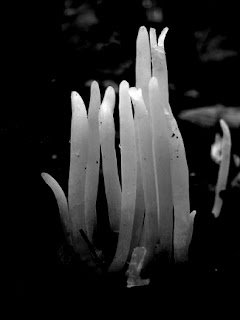 It had been a long time since Arbor had found himself trapped like this.  One of the privileges of his skill was that he had only ever been caught once, and that when he was a child, begging and thieving in Farla's marketplace.  And as for the one who had caught him: Arbor prided himself that she was the one being in all the wandering world whom he could never have evaded.  Even as he lay trapped in the darkness of The Tower of the Heart, even as his hand searched for the blade at his belt, he could recall her sudden grip upon his wrist, firm as fear, and how she had looked down at him with a smile, even as he struggled to get free.

Arbor returned his thoughts to the present.  While his mind had wandered, his hand had found the instrument he needed: a short-bladed, stub-handled dagger.  Moving as slowly as he could, conscious that any vibration might cause the fungus to release more of the silken cords, he brought the blade towards the densest part of the sticky tangle and attempted to cut. The result was, he had to concede, disappointing: the fibres, rather than yielding, instead clung to the blade, so that it cost Arbor some effort to wrench it free. Whoever it was that had stationed the fungi here in the darkness had a turn of mind that he might have found pleasingly devious, if only he hadn't become its victim.  It was time to think again.  He would not panic; inspiration would come, it always did.  And as he waited for it, he would send his thoughts back to the marketplace, and to the woman who smiled down on his struggles.

"Don't be downhearted, young one", she had said, her grip still firm, "none have come so close to picking my purse in more years than you can imagine".  Then she had raised her free hand up to his face, opening it to reveal a small mound of glittering powder in her palm.  It had fascinated him, the specks and sparks of light holding his attention even as the woman had bent down to him and blown the powder into his face.  What had followed, almost instantly, was sleep.  When next he had awoken, he was in the deepest cell in all of Veresh, hundreds of leagues from Farla and utterly alone.

"At least this time I'm at home", he told himself.  The thought was less comforting than he would have liked.  He had escaped the dungeon in Veresh not just through skill and strength but through a child's inability to contemplate defeat.  Here, in this cell within The Tower of The Heart, defeat seemed all too real a possibility.  At least, back in Veresh, there had been light.

And then Arbor remembered the second of the three things and one more thing that the long, dark-dressed man had told him in the forest: "A man who can kindle light in Otherwhile's darkness is liable to go far", he had said, "you'd do well to remember that when the time comes".  Arbor was suddenly sure that the time was now.

Keeping a careful grasp on his blade, Arbor stretched his arm out once more, letting his fingers caress their surroundings light as snowflake-fall.  At first he found only the fleshy digits of the fungus, feeling them tremble even at the whisper of his touch, but further, oh-so-gentle, exploration found his hand touching the stone tiles of the floor.  He kissed his outstretched finger against it for a moment, grateful to fate, then slowly turned the blade in his hand, at the same time raising his free arm as high as he could before plunging it down again with a great roar.

The cry had immediate effect: though he could see nothing, Arbor could feel the air around him fill with the spider spindles' webs.  At the same time, his blade struck the stone tiles, sending up a spray of sparks.  He had read once of how the people of Shende used the silk of the spider spindle to kindle their fires even in the face of that island's eternal rains.  It seemed that Shendefolk were wiser than their reputation suggested: the touch of a single spark was enough to cause the sticky cords to burst into flame as they arced above Arbor's web-wrapped body.  Within a moment, the air was aroar and the room was a ball of white fire.  Within a moment more, the flame was gone and the room was empty, the spider spindles and their webs consumed; only Arbor, his hair singed, his skin red and raw from the brief flame, was left behind.

He coughed and raised himself unsteadily on to all fours.  He had escaped, just as he had done in Veresh, all those years before.  In Veresh, though, he had found the woman waiting for him, wearing that same smile, and she had taken him once more by the wrist and led him away to her home deep within the mountain walls and his life had changed forever.  This time, or so at least he hoped, there would be no-one to greet him as he stepped through the door of his cell.

Arbor made his way on into the darkness.