How the Planets Were Tamed

The following has been reconstructed from fragments of the Pendlewilde scrolls, held in the collection of Jephsomewhat Quincescuttle.  I am grateful to several lay members of the Scriptorial Order at Farla for their assistance in restoring this early version of what is one of Otherwhile's oldest legends.

Long ago, when Time herself was young and loved to dance, the dark fields of Night extended to forever and beyond and in Night's fields lived the Stars.  Small and swift, they moved among the black stems of Night's crop, joining in Time's waltz.  And as they moved, they cast their light against the dark, feeding the soil they trod.  And so many were they that wherever they danced Night's wide, dark fields were filled with light and Night's tall, black crops grew strong.  And so the dance progressed. 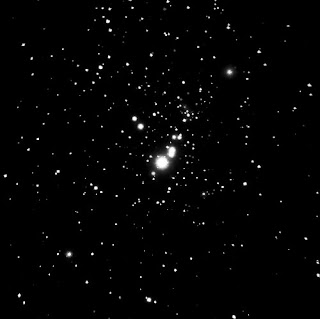 And then, after an age and an age and an age had passed, strange Beasts arrived in the fields of Night.  Vast they were beyond imagining, each step of their great, grey limbs enough to set the dark sky trembling, each belch from their long, deep throats enough to set the wind to whirl and to scatter Night's crops.  Their wide and rocky frames clattered and rattled and creaked, their great mouths moaned and groaned and roared.  Their eyes were as big as oceans, their bodies were as broad as continents and their bellies were filled with hunger.

Where the creatures came from none knew.  All agreed that they had travelled far, from beyond the realm of Night, from beyond even the lands of Time.  Slow and steady the beasts moved, wide and far they ranged, driven ever onward by their hunger.  They snapped at the sky but their craving was not sated, they tore Night's crops from the ground but could not end the emptiness within.

And then they spied the light.

And then they saw the Stars.

And then they knew how to fill their vast bellies.

Slow as they were, the Beasts were too large to be evaded.  With their enormous jaws they tore wide stretches of the Star-crowded fields from the land and plunged great swathes of Night's realm into darkness.  They feasted long and feasted well and yet their hunger saw no end.  Thus, by the thousand and the thousand upon thousand, the Stars perished and so awful was their passing that Night wept and Time ceased to dance.  And now the Stars knew great fear.

Great ages passed and the Stars fled far among Night's fields but always the Beasts pursued them and scattered them and Night's realm grew ever darker.  Yet all was not lost, for while Night wept, Time had set herself to work, gathering up Night's scattered crop and setting her slim fingers to weaving its thick, dark stalks.  And so Time made strong, dark ropes and gave them to the Stars.

And now the Stars arrayed themselves across Night's fields and awaited the coming of the Beasts.  And when the Beasts came upon them the Stars girdled the wide, grey necks and bound the vast, grey limbs with Time's dark ropes and though the Beasts thrashed and bellowed they could not move.

And now Time spoke to the Stars and instructed them and the Stars drew off the hot, bright blood that coursed through the Beasts' rocky veins and pulsed from their crystalline hearts.  And the stars placed the blood in a great bowl and set it in the middle of Night's realm, where it cast light and heat upon Night's crop. And so the crops were fed and the Beasts were calmed and the Sun was born.  And now the Stars drew tight the dark ropes around the Beasts' bodies and set them on long reins.  And now Time began to tap her feet to begin her dance anew and, at the sound, the Stars cracked whips and set the Beasts to circle round the Sun.  And so the Planets were born.  And so ends the tale of their taming.
at 08:27