The Theft of The Heart of The World, Part I

[This story is rather different in style to some of the others that have appeared here, less folkloric and more old-fashioned fantasy tale.  It concerns Arbor Vulpa (whom you may remember from A Brief Survey of Otherwhile), a notorious thief and future king.]


Arbor Vulpa braced his back against the bricks behind him, his legs against the stones opposite and looked down. In the dark streets below, torches moved hither and thither as their bearers hurried about their business, like fireflies skittering above an inky pond. As far as Arbor could tell, not one of them even considered looking up.

“The trouble with you people”, he thought to himself, “is you never raise your sights. It shows a worrying lack of ambition”. He was, truth be told, a little drunk. He needed to be: he was about to carry out the greatest theft in the world.

Arbor shook his head, then turned his gaze towards the roof of The Palace of Days. With a grunt he began to ease himself upwards once more. Fifteen minutes later he was resting his head on the parapet and breathing hard, while the chilly fingers of the wind massaged his sweat-soaked back. Worryingly, the climb had been the easy part. The next stage ... Arbor felt his thoughts sliding away from him like hound-chased sheep. He took a firm grip on the wall he was resting against and raised himself to standing. The cure for his problems was action. He turned towards the lonely turret in front of him, The Tower of The Heart. 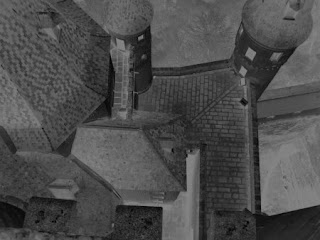 “The door or the climb?” Arbor asked himself. The theft had been long and carefully planned but it was always important to leave some elements to discretion. Arbor liked to give himself room to flex under the weight of chance, he also liked to give himself room for art. Just as he was about to allow himself a self-indulgent smile at the thought, an icy gust prodded viciously at him. The decision was made. A moment later, the little door’s lock was picked and the door itself was swinging to behind the thief.

The dark staircase on which he crouched ran, Arbor knew, directly from the roof of the tower to the Palace’s main guard room below, giving no direct access to the rooms within the tower itself. This, Arbor felt, showed a tragic lack of trust on the part of the designer. He would not let it dishearten him, however. Instead he padded up the stairs towards the roof.

It did not take him long to break out. The red powder that had cost him so much ate its way through the wooden rafters in just a few minutes, just as the fat-faced robber of a merchant had claimed it would. After the powder’s work was done, it was easy for Arbor to remove the tiles above and pull himself up and out into the cold night air. Without pausing he moved a little higher, towards the roof’s centre and applied the same process in reverse, allowing the starlight to fall for the first time into the much-legended inner rooms of the Tower of the Heart. It was, he felt, a considerable improvement on the building’s original design.

His charming new skylight before him, Arbor reached into his belt pouch, pulling out a flint and one of the dried wisps of candle blossom he had helped himself to while the fat-faced merchant was busy overcharging him for the red powder. Soon a spark was struck and the blossom was descending slowly into the dark below, a tiny star falling to earth, its glow illuminating the room about it. Satisfied, Arbor swung his slim legs into the hole he had made, letting them dangle in the void for a moment. This, he knew was the point of no return. The prize he was seeking was very rich; all he could be certain of was that the wards around it would be strong and subtle and perhaps even surprising. Generally strength, subtlety and surprise were gifts he preferred to give rather than receive.

He whispered a brief “Ah well” to the night and, in the same moment, thrust himself down into the darkened room. He landed in a crouch, his feet, which were braced for hard stone, striking something altogether more yielding, his right hand touching not rock but ... ... could it be grass? Somewhere – somehow inside the room but far more distant than the dimensions of the tower should have allowed – an owl called. Arbor stood up with the careful grace of a stalking cat and took in the dim scene around him.

“A forest”, he thought, “Well, at the very worst this is going to make for a most interesting death”.

He padded on into the trees.